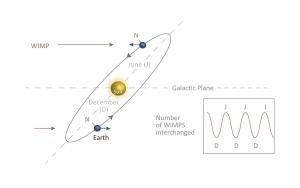 The basic goal of direct detection dark matter experiments is to measure the energy deposited when WIMPs interact with nuclei in a detector, transferring some of their energy to the nuclei. These experiments usually operate in deep underground to reduce background from cosmic rays.

The dark matter event rate is expected to annually modulate, creating a signature change in the event rate that can be used to identify it in these detector. Under commonly accepted models, galactic dark matter is distributed in a diffuse, roughly spherical halo through which the solar system travels as the Sun moves within the disk of the Milky Way. Because the relative velocity of the detector with respect to the dark matter depends on the time of the year, the count rate shows a sinusoidal dependence with time. Such a modulation would exhibit a period of one Earth year and peak when the relative velocity is at a maximum (June).

The Dark Matter Experiment (DAMA) has released data from two run phases (DAMA/NaI and DAMA/LIBRA) of its NaI(Tl) detectors at Laboratori Nazionali del Gran Sasso (LNGS) in Italy. The cumulative exposure results in a 9.5 sigma modulation that may be a dark matter signature. The dark matter interpretation of the results are disputed because dark matter has been excluded by observations from other direct detection experiments (e.g., LUX, XEXON100, SuperCDMS, EDELWEISS, ZEPLIN-III).