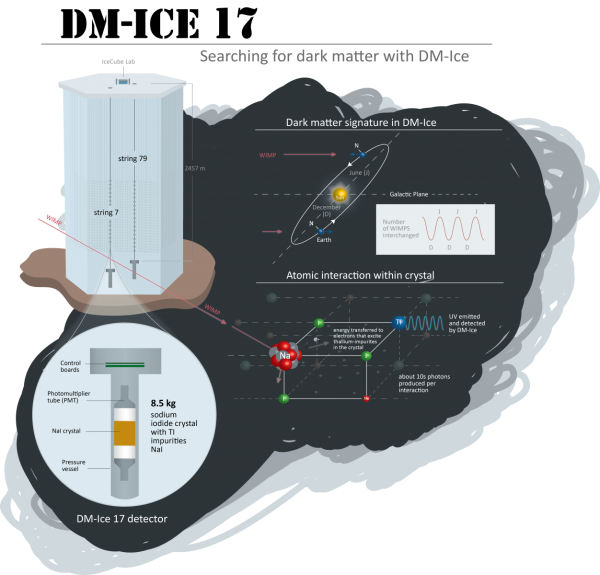 DM-Ice is a direct-detection dark matter experiment to test DAMA’s assertion that the observed annual modulation is due to dark matter. DAMA’s result is the longest-standing dark matter claim with NaI(Tl) target. DM-Ice aims to understand origin of DAMA’s signal by using the same target, and is the only experiment with access to both Northern and Southern Hemispheres.

DM-Ice is a phased experimental program: DM-Ice17 with 17 kg of NaI(Tl) crystals, was deployed in December 2010 at 2450 depth at South Pole. DM-Ice37 with 37 kg of NaI(Tl) is in on-going R&D status at Boulby Underground Laboratory, U.K. DM-Ice250 with 250 Kg of NaI crystals is currently under design, planned to run at Northern Hemisphere (Canfranc Underground Laboratory, France, and Y2L, South Korea). Three NaI(Tl) collaborations (ANAIS, DM-Ice, and KIMS) will share results of R&D efforts in preparation for a science run. Currently DM-Ice and KIMS are working together and commissioned 100 Kg of NaI detectors at Y2L, started taking data since September 2016.