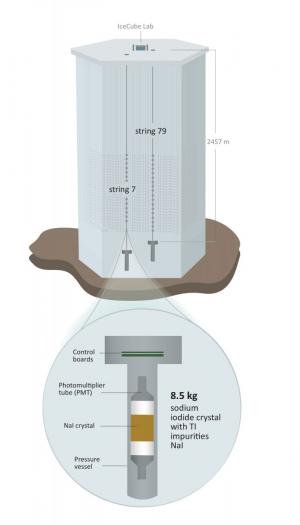 DM-Ice17 is a direct-detection dark matter experiment consisting of 17 kg of NaI(Tl) target material. It has demonstrated the feasibility of remote operation of a low-background NaI experiment to directly test the annual modulation of the WIMP-nucleon scattering rate observed by DAMA.

DM-Ice17 consists of two 8.47 kg NaI(Tl) scintillating crystals, each optically coupled to two photomultiplier tubes (PMTs). It was deployed in December 2010 on the bottom of two strings from the IceCube Neutrino Observatory, 7 m below the bottom IceCube PMTs, and is the first dark matter detector to operate in the Southern Hemisphere.

An annual modulation arising from dark matter will have the same phase regardless of the location on earth. Seasonal effects, however, are opposite in the Northern and Southern Hemispheres. The peak of the dark matter modulation at the South Pole is completely out of phase from seasonal backgrounds that peak in the summer (e.g., muon flux). Such a location allows one to disentangle seasonal environmental effects from a dark matter modulation. Further, the 2500 m ice overburden significantly reduces the cosmic ray flux at the detectors.

The First Data from DM-Ice17 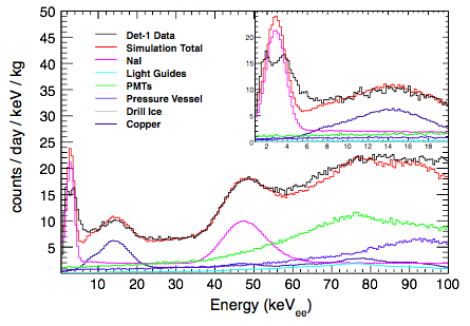 DM-Ice17 was successfully constructed and deployed in December 2010. The first data paper used the run from July 2011 to June 2013 to demonstrate the excellent environmental conditions including temperature stability with daily RMS of 0.02 degree Celsius. A live time of ~99% was achieved by the detector during this period.

DM-Ice17 demonstrated for the first time that low-background scintillator detectors can be remotely calibrated and operated under the ice at the South Pole. Moreover, the background observed in DM-Ice17 is in good agreement with simulation of expected contaminants levels in detector components.